The online grocery delivery landscape has an unprecedented momentum, triggered to a great extent by the global pandemic’s disruptive footprint on supply chains and consumer behaviour. It is also an increasingly competitive industry. To hit their growth goals, delivery businesses and services need to pay close attention to the latest trends in the marketplace.

Global consumers have taken a definite turn towards online grocery shopping since the beginning of the pandemic. 45% are shopping more online for groceries compared to pre-pandemic levels.

In general, e-commerce has seen the biggest jump in e-shoppers in 2020, from 66% to 71%. And while Western markets hold 64% of total e-commerce turnover, the biggest growth of 36% comes from Eastern Europe. Greece had by far the largest B2C e-commerce growth rate in Europe (77%), while elsewhere in Southeast Europe North Macedonia (37%), Albania (33%), Croatia (32%) and Romania (30%) also registered above average figures.

Meanwhile, in Bulgaria, online grocery stores grew by more than 100% following increases in the number of orders from the onset of the pandemic, says Janet Naidenova from the Bulgarian E-commerce Association. In North Macedonia, where grocery shopping online was extremely small, consumers are starting to use online supermarkets to have groceries delivered.

As online shopping increases, so does the demand for delivery services. Grocery delivery covers the set of processes from fulfilling orders to having them delivered. More than 50% of online grocery shoppers in Italy, 33% in France, 30% in Germany, and 20% in the UK used courier delivery in 2020.

The Recursive reviews the latest online grocery delivery market trends and innovations that are spreading throughout Southeast Europe.

With the new wave of stay-at-home online shoppers, retailers were faced with more pressing logistic challenges. To meet new demand and avoid massive investments in developing and maintaining internal fleets, some grocery retailers have partnered up with third party grocery delivery service providers.

Quick commerce applications fill in a competency gap with retailers, allowing them to continue to focus on their core speciality. Joining forces with delivery specialists also helped retailers scale quickly.

Across CEE, a growing number of online grocery retailers are competing in the fast commerce space, often in partnership with quick delivery apps. Glovo, local partner of German hypermarket Kaufland, for instance, went for a shopping spree throughout the CEE earlier this year, to strengthen its position in the market. In Bulgaria and Romania, Glovo acquired foodpanda – a delivery service previously owned by Delivery Hero.

In Romania, Everli is the most recent entry in the fast-delivery grocery market as a third party app. The Milan-based delivery startup plans to expand in the local market, as well as Germany following its Series C ~€87 million round.

Elsewhere in Serbia, there has been an explosion in quick commerce applications partnering with retailers, like Wolt, Glovo, Donesi, and Car Butler, said Zorna Milidrag, from the E-commerce Association of Serbia. By taking on more than just food deliveries, quick e-commerce apps started resembling small marketplaces.

Meanwhile in Greece, efood is one the market leaders in online food delivery, founded in 2012 and acquired by Delivery Hero in 2015.

The race to fast delivery

Behind the scenes, retailers had to rapidly adapt by, for instance, switching to micro-fulfillment tactics. Through micro-fulfillment, retailers place small-scale warehouses in urban locations, close to the end-customers, to improve delivery times. In Romania, Glovo recently opened 11 fulfillment centers to respond to the demand for fast-delivery services.

Dark stores, dedicated exclusively to fulfilling on-demand online orders, have also popped up in response to the delivery race. Players in this space stock directly from producers and suppliers in small warehouses, from which they further distribute to the end consumer.

In Europe, the wave of investments in this space is led by unicorns such as Turkey-based Getir and Germany-founded Gorillas and Flink. Launched in 2015, Getir is a pioneer in the space of 10-minute delivery through its dark store model and focus on essential groceries. The company raised ~€480M in its latest funding round, reaching a valuation of over $7.5 billion valuation. Meanwhile, Gorillas, operating more than 180 warehouses across nine markets, recently attracted ~€0.86 billion in a round led by Delivery Hero.

Read more:  Who is Who in the Bulgarian crypto ecosystem

The trend is also spreading to Southeast Europe. In Greece, Pop Market is one of the first grocery retailers to bring the dark store model. The startup will operate a network of dark stores in the center of Athens, aiming to provide 15-minutes delivery for orders taken through its smartphone app. Pockee, a startup covering grocery shopping analytics, has also recently ventured into fast grocery delivery in Thessaloniki, under the name PockeeMart.

In Romania, some grocery companies are turning to the dark store model. KooKoo Grocery recently raised €500K in a pre-seed round from Blueberry Muffin in order to open two dark stores manually operated, increase the portfolio to 10,000 SKUs, and build a dedicated team. Antonio Iftimescu, Founder of KooKoo Grocery explains more about this shift:

“Today, the dream is to offer the urban consumer a new way to shop high quality products and daily essentials 24/7. We deliver fast enough from our urban dark stores or automated micro-fulfilment centers. And if our consumer would fancy a walk, we would like to build modern pick-up zones and self-service shops. Our main goal is to have a relevant, high-quality assortment of fresh food, dry food, home care, personal care, baby care, pet products, OTC. Of course, there is plenty of space on our shelves for mainstream brands.”

In the Czech Republic, grocery delivery startup Rohlik recently raised a €100M Series C investment round, adding to CEE’s list of unicorns. Rohlik has a slightly different value proposition in the space. It operates as a virtual supermarket, delivering more than 17K items in less than two hours, and partners with wholesale players, large supermarkets, and small food merchants.

While not yet a current trend, futuristic delivery options may be closer to becoming a reality than expected – and change the game radically. Around the world, drone deliveries have already been successfully tested. And while they have limited use to urban areas and products of certain nature and size, further operational and regulatory advancements could widen their application in the future.

We may see faster development from delivery services using land-based, wheeled robots. Last year, The Save Mart Companies started using autonomous robots from Starship Technologies to deliver groceries to their customers from a flagship store in California. The robots could carry the equivalent of three shopping bags and travel at a safe speed. So far, Starship Technologies reached more than 500K autonomous deliveries, since delivering their first package in 2018.

Meanwhile, in Romania, Glovo is testing the same approach with another electric robot, by Kiwibot. Glovo wants to experiment with the project using delivery robots in Brasov. To complete their trips, robots would navigate on sidewalks and pedestrian areas at a maximum speed of 15 km/ h, while using AI and deep learning to detect and avoid obstacles on the road.

Taking it a few steps forward, Walmart, Ford and autonomous vehicle platform Argo AI partnered to launch a new grocery delivery service to customers using autonomous vehicles. A trial is expected in a few cities across the US later this year.

Finally, the global movement around mitigating climate change effects and transitioning cities to more resilient energy and transportation systems has an increasing influence on the logistics and delivery industries. A key driving force are customers, who are becoming more and more conscious and deliberate about the environmental impact of their brand choices.

As such, we can already see ecommerce companies experimenting with green packaging and transportation alternatives – and expect to see more emphasis in this area in the future. Some companies are starting to opt for delivery fleets with low-carbon footprint such as bikes and electric vehicles. Electric giant Amazon, for instance, recently began making deliveries with its first electric van delivery fleet. URB-E is using electric bicycles to make grocery delivery more efficient along the streets of New York. And in Southeast Europe, bikes are one of the vehicles of choice for food and grocery delivery couriers in urban areas. 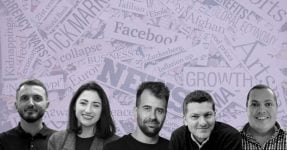